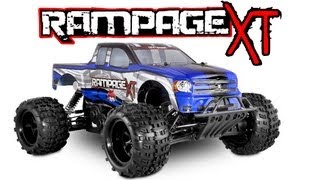 There are many fellow RC enthusiasts running their 1/10 scale vehicles at the local RC park. Dropping the large scale Rampage XT to the ground, you fill its 500cc gas tank with pre-mixed unleaded gasoline/oil. You prepare the XT for its starting sequence by pushing the primer bulb a few times and rotating the choke lever. A tug of the starter cord brings the monstrous 30cc HY 2-stroke gasoline engine to life. An angry growl bellows through the surrounding trees as the Rampage XT exhales through its chrome plated performance tuned exhaust pipe. The other RC vehicles roll to a halt, as their drivers peer in your direction. You burp the throttle as if the beast is taunting its prey. Anticipation builds as you get ready to unleash the Rampage!

Like cockroaches, RC vehicles scatter to the field's edge, with their drivers paying full attention to what is about to unfold in front of their eyes. With a brisk stab of the throttle, the Rampage XT claws at the dirt beneath, throwing it rearward. The XT launches itself forward with a loud thunderous roar. You have officially gained the full attention of everyone within hearing distance. The large 1/5 scale Rampage XT monster truck is now hurling dirt in every direction, like a crazed beast frantically searching for underground prey. The Rampage XT is a sight to see.

The Rampage XT is both fast and powerful. Aluminum bodied oil filled shocks, coupled with 4-wheel independent suspension, add a degree of prowess to the XT's otherwise aggressive display of dominance. The 30cc HY gas engine sends huge amounts of power to its reliable, shaft driven, 4-wheel drive drivetrain. Everything on the Rampage XT is big, including its tunable sealed gear differentials, steel drive cups, and large diameter drive shafts.

The Rampage XT doesn't rely solely on its impressive size and scary power to turn heads. With its aggressive stance and stylish monster truck body, now covered in dirt, the Rampage XT is a great looking vehicle while on the shelf, or attacking nearby terrain.

A 2.4GHz radio system commands precision from the powerful large scale steering servo and metal gear throttle/brake servo, which allows the driver to remain in control while drool collects at the feet of onlookers.

As you near the end of your run, you engage the dual disc brake system and drive the Rampage XT back to its starting position. Still in awe, spectators slowly pick up their jaws and begin to process what they've just witnessed.

As your body trembles with excitement, you realize that you may have just experienced the single most exciting thing of your entire life. Looking out among the other fellow RC enthusiasts, who are now dreaming of owning a Rampage XT monster truck for themselves, you shout, "You have just witnessed the Rampage!"

Get the Rampage XT 1/5 scale monster truck today, and experience the power of the Rampage for yourself!